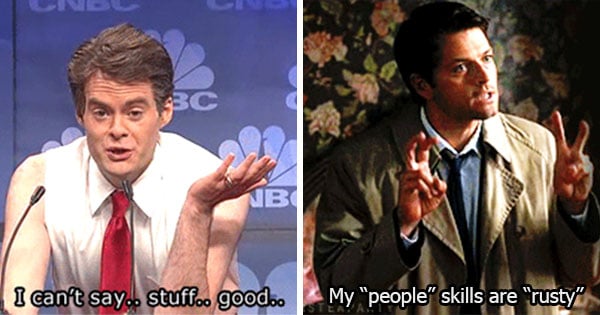 Socializing doesn’t come easy for everybody. There’s a huge population of people who get cold sweats at the mere thought of asking a stranger for directions.

If you belong to that group, you can probably relate to a lot of these:

You wish you could go around with a sign saying, “Kindly provide a week’s notice before introducing yourself to me.” It’s not that easy to just up and talk to some stranger; you need a good seven days’ worth of preparation for that shit.

Honestly, it’s not that you don’t like parties, it’s just that you never know what to do once you’re there. You go through the motions: hold a beer, “converse”, “dance”, but somehow you still feel like a Martian on Jupiter.

#3. Being on the receiving end of attention.

Suddenly you become painfully aware of every single cell in your body and conveniently forget how to operate them simultaneously. By “attention”, you mean talking in front of a group, going on stage, or people looking in your general direction.

#4. Getting unreasonably sweaty whenever you get a phone call.

You secretly curse Alexander Graham Bell for inventing the telephone. The world, in your opinion, would be immensely better if we continued communicating exclusively by letters or telegrams.

Nope, that face does not look as sexy as you think it looks.

#6. Remembering embarrassing moments from years ago.

These memories usually attack you at night, just before sleep sets in. “Why did I ever say that?” *hides under the covers*

#7. Taking too long at the cashier.

Anxious people compare the Theory of Relativity to standing in line at a cash register by yourself and standing with 5 people in line waiting for you to stuff your change back into your wallet and get the hell out of the way.

Your brain panics and you blurt out the first thing that comes to your mind, which of course never turns out to be something interesting or crazy, just stupid and embarrassing.

#9. Getting stage fright in the middle of a sentence.

Suddenly, the realization that you are talking to another human being and feeling the pressure of not making it another failed attempt at social interaction hits you like a ton of bricks. You mentally panic, forget what you’re saying, and awkwardly drift away mid-thought.

#10. Seeing someone you know walking towards you.

Anxious people go into full-on anxiety mode when they see an acquaintance coming down a hallway or street. “Do I say hi even when he’s still 50 feet away? Do I wave? Someone tell me the protocol!”

#11. Losing your ability to speak in front of your crush or boss.

Of course, your speech fails you at the exact moment when you need it most. Suddenly your English not be good, no more words come.

#12. Getting trapped in unwanted conversations at parties.

For the anxious person, there is no such thing as a graceful exit. So you stand there all night listening to a stranger talk about his Matchbox collection, and find yourself secretly wishing for a bomb to hit your corner of the room.

For something with the word “small” in it, this is such a big f*cking deal.

#14. Not knowing how to react to affection.

The only hugs you are open to are the ones being given by furry, four-legged animals. Biped Hugs are awful hugs.

#15. Wishing to melt into the wall after every failed social interaction.

“Do you not know the social ramifications of your behavior?” Me, telling myself I should not have breathed next to the popular co-worker.

#16. Spending a ridiculous amount of time trying to hide the crazy.

Nobody needs to know just how awkward you are. “Maybe if I don’t talk and keep my head down I wouldn’t be so obvious?”

#17. … But when you’re with people who make you feel comfortable enough to be yourself, you feel like you can breathe again.

The quiet, quivering ball of nerves disappears and is replaced by a friendly, charming other person who can talk in straight sentences. You know that little guy’s in there somewhere… if only he were more cooperative.