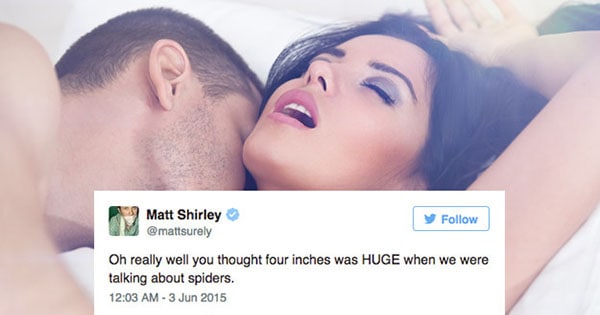 No pictures of spiders, we promise. This is a safe space.

Walked into a spider web and did an hour of tai chi in five seconds.

HER: I want you to make me scream

ME: *tosses spider onto her chest*

Not sure if I washed the spider down the drain in my shower or if he took one look at me naked and then leapt willingly to his death.

Sometimes I run across a room really fast so a spider sees me out of the corner of its eye and spends the evening worrying where I've gone.

Spider-Man is my favorite superhero whose name is made up of 2 things that scare the shit out of me.

Have fun, but be careful. Your sister was vacuumed up last week, and yesterday your cousin was killed with a shoe.

WIFE: COME AND GET RID OF THIS SPIDER
ME to spider: I told you, you'll get your money. Leave my family out of this
SPIDER: you've got 2days

How to kill a spider: get a piece of tissue paper, approach it slowly, and very carefully, burn the house down.

Every day, I hope I don't get bitten by a spider. I'm not afraid of spiders, I just don't want the responsibility of being a superhero.

It's funny, when I walk into a spider web I demolish his home and misplace his dinner yet I still feel like the victim.

[Spider sits at computer and Googles probability of being eaten by human in his lifetime] Holy shit Sharon, COME SEE THIS

*sees a spider*
I'm going to kill him
*turn around to get a shoe*
*turns back around and spider has 8 shoes*
Alright, let's be cool here

Sorry I threw your baby but there was a spider on her.

Oh really well you thought four inches was HUGE when we were talking about spiders.

Wife: There's a spider in the kids' bedroom
Me: I'll take care of it
*raises spider like one of my own*
*has a little cry when it graduates*

In truth, spiders are harmless*

*Save for a few species whose venom reprograms your immune system to tell your body to eat its own organs.

Spreads two others …. Dammit, no

[outside a blazing house]