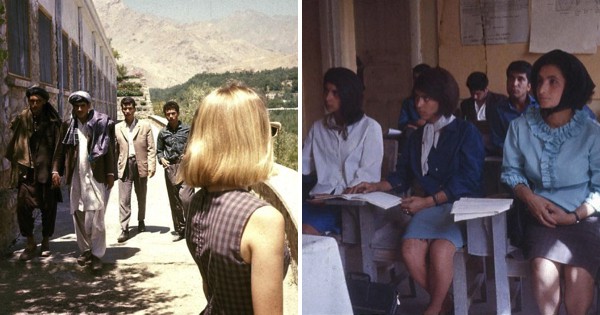 Whilst working for UNESCO, Dr Bill Podlich traveled to Kabul, Afghanistan with his family in the 1960s. He was fascinated by the sights around him and decided to document it all. The photos show smiling faces, flash cars, girls in short skirts and a much more liberal Kabul that is incredible to see today.

Along with his wife, Margeret, and teenage daughters Peg (in the sunglasses) and Jan, Podlich took sightseeing trips on buses like this one to Peshawar in Pakistan.

The photos show a relaxed lifestyle with Western influences clearly visible in the gleaming new cars in this shot of a petrol station.

“When I look at my dad’s photos, I remember Afghanistan as a country with thousands of years of history and culture,” remembers Peg.

“It has been a gut-wrenching experience to watch and hear about the profound suffering which has occurred in Afghanistan during the battles of war for nearly 40 years.”

“Fierce and proud, yet fun-loving, people have been beaten down by terrible forces.”

“Many Afghans have written comments [on the website] showing their appreciation for the photographs.”

This shot of a Buddha statue in Bamiyan Valley, a UNESCO World Heritage Site, is particularly poignant as the two largest of these statues were destroyed by the Taliban in 2001.

“Of course, there were loads of cultural differences between Arizona and Afghanistan, but I had very interesting and entertaining experience,” says Peg.

“People always seemed friendly and helpful. I never got into any real difficulties or scrapes, even though I was a fairly clueless teenager!”

“Times were more gentle back then.”

Here men cool off in the shade, gazing out at Istalif, a centuries-old center for pottery near Kabul.

“Afghan girls, as well as boys, were educated up to the high school level,” remembers Peg, “And although girls and boys wore uniform, the girls were not allowed to wear a chadri on their way to secondary school.”

Jan, left, and Peg, right, are seen here at Paghman Gardens, which was completely destroyed during years of war just 30 years after this photo was taken.

This snap shows the American International School of Kabul, which Peg and Jan attended. The school no longer exists, although Peg keeps in touch with old school friends via social media and they have frequent reunions in the US.

These students are in a class at the Higher Teachers College of Kabul where Bill Podlich worked and taught for two years.

“If you look at photos of the devastation of Europe or Asia after WWII and compare them with pre-war times, you can get a similar feeling while looking at these photos.”

“Perhaps looking at these old pictures, when Afghanistan was a land of peace, can encourage people to see Afghanistan and its people as they were and could be.”

“It is important to know that we have more in common with people in other lands than what separates us.”

You can see more photos at the Denver Post archive.