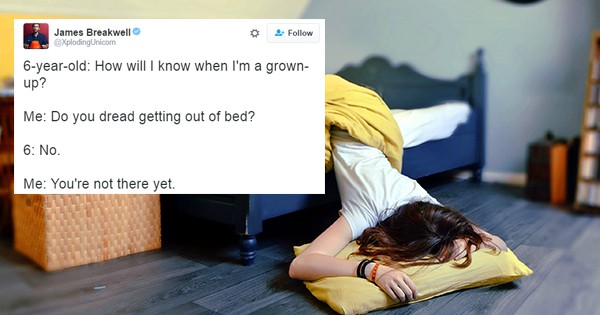 Sometimes I can be a real morning person; like in the afternoon when I get up.

Me: Do you dread getting out of bed?

Me: You're not there yet.

It's really hard to wake up early and go to the gym but it's worth it because afterwards I feel really truly terrible.

I've never gone skydiving, but I do regularly snooze a little longer after I've turned off my last snooze alarm, so I get it.

wowe wakig up super early is great, instead of getting tired late at night u get tired by 9am cool

The best part of waking up is the Folgers I threw in your face for getting me out of bed so damn early.

i was wondering why my alarm didn't go off this morning and i realized this is what i had as my alarm pic.twitter.com/GIwLBs1ktm

A great thing about waking up early is you have the whole day to go back to bed.

I'm always awake early but I'm not as much of a "morning person" as I am a "don't talk to me ever" person.

I may not be good at sleeping, but I compensate by being really bad at waking up

I HATE WAKING UP AT THE CRACK OF DAWN JUST TO GO TO SCHOOL 😡😔 pic.twitter.com/GO4NhqwwUx

LIFE HACK: not getting out of bed so that you get to bed sooner