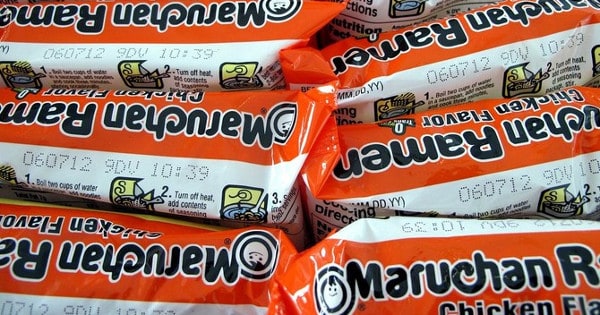 An experiment conducted by a Massachusetts, US, doctor has people questioning whether they will ever eat instant noodles again.

Dr. Braden Kuo of Massachusetts General Hospital used a tiny camera to see what happens in the stomach when digesting pre-cooked ramen-style noodles, and found that after 2 hours the noodles were still intact.

As long as the noodles stay in the stomach, the noodles’ additives, including toxic preservatives like tertiary-butyl hydroquinone (TBHQ), are in the body too.

TBHQ prevents fats and oils being oxidized in the body and is a common ingredient in highly-processed foods, like McDonald’s Chicken McNuggets, Reese’s Peanut Butter Cups, and Teddy Grahams.

Worryingly, the Consumer’s Dictionary of Food Additives reports that just one gram of TBHQ can cause serious effects, from nausea and vomiting to delirium and a sense of suffocation.

Prolonged exposure to TBHQ has been linked to biochemical changes in the body, affecting the liver and reproductive functions.

Tertiary-butyl hydroquinone (TBHQ) is a preservative that is often used in processed foods.

It is made from butane (a highly flammable gas) and tertiary-butanol (an alcohol).

TBHQ is added to food to prevent fats and oils from going bad.

It is also used as a stabilizer, to prevent ingredients from separating.

TBHQ is sometimes listed on food labels as “butane-2,3-diol” or “butanal.”

What are the dangers of TBHQ?

The Food and Drug Administration (FDA) has set a limit for TBHQ in foods based on studies that show that large doses of this ingredient can cause stomach tumors in lab animals. The FDA limit for TBHQ is 0.02 percent of the oil or fat content in a food item.

Lab experiments have also shown that TBHQ can cause:

TBHQ in food: list of foods that have it

Instant noodles are not the only processed food with high levels of TBHQ — the additive is found in many pre-packaged snacks, fast foods, convenience meals and processed foods, including:

How to avoid TBHQ

Whether you’re a parent with an ADHD child or simply concerned about eating a preservative linked to health concerns, checking food labels may help you avoid TBHQ.

If any of those words are listed on a food label, it means that the product contains TBHQ or one of its related preservatives.

If you are concerned about the amount of TBHQ in your food, always check the food labels to see if it contains TBHQ.

You can also avoid TBHQ altogether by cooking your own food from scratch, using fresh ingredients.