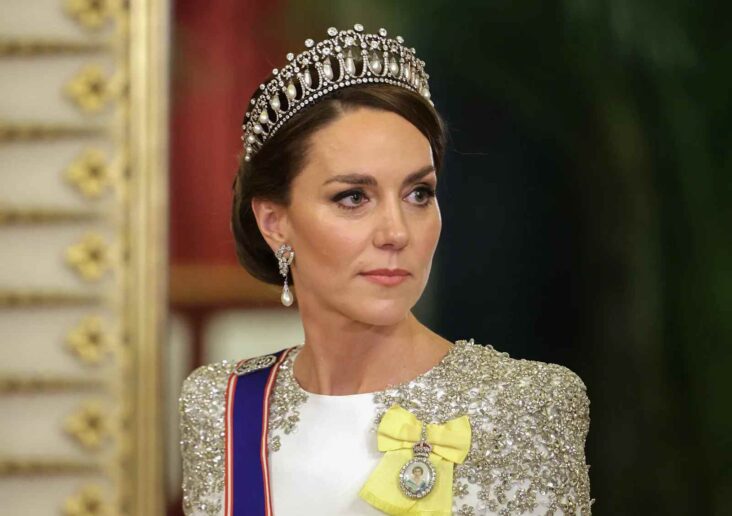 The Princess of Wales, Kate Middleton has made her first black-tie appearance.

She wore a Jenny Packham white caped gown at a state banquet for South African President Cyril Ramaphosa. The dress, embellished with glittering beading and a boat neckline, was a modest yet high-fashion pick for an evening at Buckingham Palace.

The Lover’s Knot Tiara sat atop her head. It’s a royal favorite—worn she’s it on multiple occasions—but it’s also a highly important one. The Lover’s Knot Tiara was first commissioned for Queen Mary in 1913 by the House of Garrard and is made of diamonds and 19 dangling pearls set in silver and gold.

The tiara eventually belonged to Queen Elizabeth II, who loaned it to Princess Diana, her daughter-in-law. Due to Diana’s meteoric rise to stardom, it became one of the most iconic tiaras in history. Indeed, a photograph of her wearing the diadem with a white, pearl-encrusted Catherine Walker in 1989 is regarded as one of the late Princess’s most famous photos.

Queen Elizabeth handed it on to Kate Middleton when she married Prince William in 2011—14 years after Diana died. Middleton’s tiara wasn’t the only piece of jewelry that paid homage to the royal ladies who came before her: a pearl bracelet belonged to the late Queen Elizabeth II, who died in September.

She added two badges to her golden outfit. The first was the Royal Victorian Order badge, a white enamel Maltese cross with a Tudor crown, which she received from Queen Elizabeth in 2019 “for services to the queen.” The yellow Royal Family Order of Queen Elizabeth II, conferred on female members of the British royal, was the second.

Her participation at the state supper is one of the most glamorous royal moments in years, following the cancellation of such major meetings in 2020 and 2021 due to the pandemic.