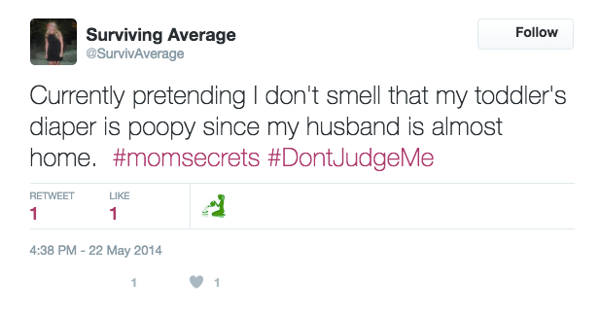 I will not lie, I have at some point had a crush on all of the Imagination Movers. #momconfessions

The biggest surprise about parenting is the lies I am willing to tell just to stop the crying.

Sometimes I make up reasons to go to Target just so I can walk alone in the isles. #momsecrets #sahm #sahp #leftthekidsathome

FACT: Had kids for one reason; to send them to the basement for paper towels when I run out of them in the kitchen. It's scary down there.

I almost just said "Calm your tits" to my 3yo. Thanks, Twitter.

You aren't a real mom until you have a car with an overstuffed glove compartment filled with napkins stolen from fast food restaurants.

I've eaten desert in the shower so I don't have to share with the kids. #momconfessions

The only reason I moved down south is so I could eventually earn the rights to say things like, "Child, please. Bitch done lost her mind."

I'm not saying I've let things slide but I put on mascara today and like 6 people at my kid's school yelled "WOW why are you so dressed up?"

Secret mom pleasures: every time I help my kid pick up his toys, I throw away one or two that I really hate… #momconfessions

I was a better parent before I had kids.#momconfessions #Confessions #shamelessparenting