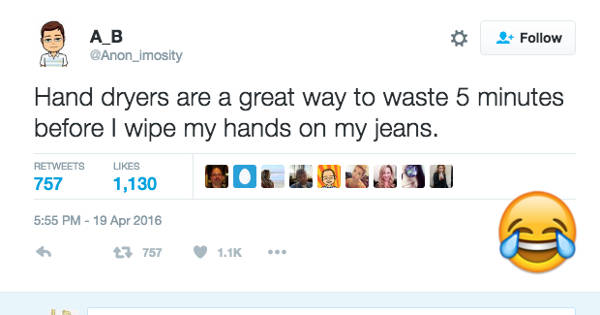 Do I just call you or should we resolve this quickly with 200 text messages?

I'm just a girl, standing in front of a self-checkout, screaming that there's no unexpected item in the bagging area.

My childhood punishments have become my adult hobbies.

The stages of eating pizza

2) This hurts. Why am I still eating?

Every voicemail I leave sounds like English is my second language.

It's a beautiful day outside!

Better move my laptop away from the window so there's no glare on my screen.

If you don't say 'haha' after everything you write, will they even know you're easygoing and breezy?

me, without money: money is the root of all evil. the things u own end up owning u

me, with money: ya can i get 20 mcchickens

me at age 8: if i eat my lunch quicker i have more time for recess

Facetime fulfills a secret human desire: to mostly look at yourself while talking to other people