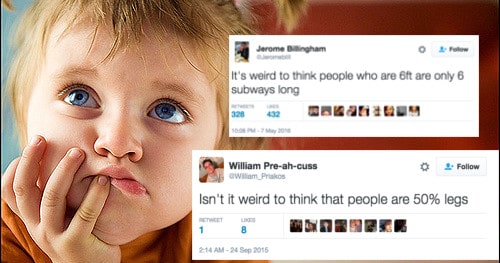 If you’ve ever found yourself randomly having a sudden but striking realization about something totally random… well, you’re not alone. They are known as ‘shower thoughts’, and as the name suggests, they tend to happen to a lot of people while they’re in the shower. Here are a selection of some of our favorite tweets of things people have thought about.

#1. Twitter’s getting philosophical about all things, like kids and parents.

#4. On the future of memories.

#8. On allergies and murderous squirrels.

Its kinda weird how we have to pay money for food that grows out of the ground. Got hoodwinked.

#15. On all those years wasted by sleeping.

Hieroglyphics are basically old school emojis if you think about it