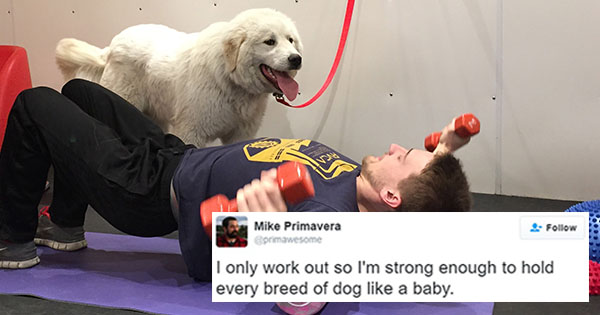 Hi, I spend 3 minutes every day choosing a TV channel to leave on for my dog, then I go to work and people take me seriously as an adult.

nice dog. Sure would be a shame if someone were to…pet it for like 40 minutes

every time I see a really old dog I just automatically assume we are friends.

[bends down to pet your dog]
Me: what's this guys name
Owner: this is-
Me [not breaking eye contact with dog]: yeah I wasn't talking to you

I always wanna go up to ppl's dogs & say "OMG I'm such a huge fan of your work. I've been following it since over there." *points 7 ft away*

I wish there was a way to keep in touch with dogs I meet outside of grocery stores.

When you're at a party and the dog comes downstairs pic.twitter.com/t2E13mhD4k

In 34 years I've said I love you to two women and every dog I've ever seen.

[runs into friends with baby]

Me: OMG WHO'S THIS LITTLE GUY.

Friends:*picks up baby* wanna hold him?

Me:*kneeled next to dog* what?

If you're carrying around a bag of your dog's shit, the dog won.

"can i see ur phone"
uh ok one sec pic.twitter.com/fYzpjoSk8n

I only work out so I'm strong enough to hold every breed of dog like a baby.

"We'd be rich if you just said one fucking word"

– me, drunk, talking to my dog

A strip club, but instead of women taking their clothes off it's just dogs and instead of lap dances you can just pet the dogs.

"You bought the wrong dog food, he hates this kind!" said my wife of our dog who once literally ate another dog's puke.