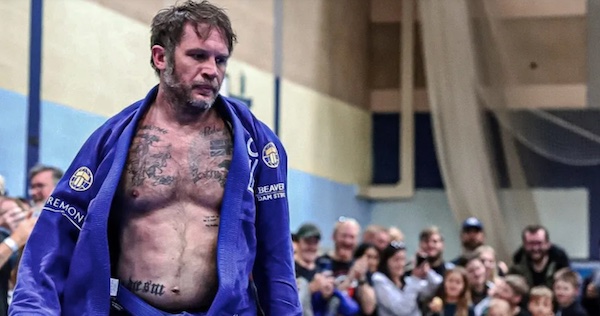 Tom Hardy shocked spectators when he entered a martial arts competition and won the gold, demonstrating that he is just as much of an action hero in real life.

The UMAC Milton Keynes BJJ Open 2022 was held on Saturday at Oakgrove School in Milton Keynes, and the 45-year-old Venom actor displayed his strength while competing in it.

He had made a covert arrangement to participate in the battle in a nearby school’s gym, where he knocked out every one of his opponents.

The Hollywood actor stunned the crowds when he appeared in a blue jiu jitsu gi, which revealed a glimpse of his lean body and numerous tattoos.

Tom appeared prepared for battle and displayed his jiu jitsu prowess as he stunned his rivals and battled his way to the championship match.

The competitor, a highly skilled blue belt in the combat sport of ground fighting, easily dispatched the opposition to take home the gold with a stunning arm bar.

He was seen with a diploma and gold medal that bore his full name, Edward Hardy, but he usually goes by his middle name, Thomas.

The UMAC BJJ open was open to “all BJJ belt levels in adult, juvenile, and kids categories,” according to the event description.

Tom, a Hollywood hardman, brought the same degree of energy to the battle as he does to his action movies, according to Andy Leatherland, 42, who faced Tom in the nail-biting final.

The father, a blue belt and sales manager said he had joined the nearby competition after learning that Tom may be present.

Tom became interested in Brazilian Jiu-Jitsu while preparing for the role of a former boxer who trains to compete in mixed martial arts (MMA) in the movie Warrior.

Tom took a picture with his gold medal and diploma after winning.

And he is anticipated to soon return to the Venom franchise in a third installment as Eddie Brock. Venom 3 is now in pre-production.