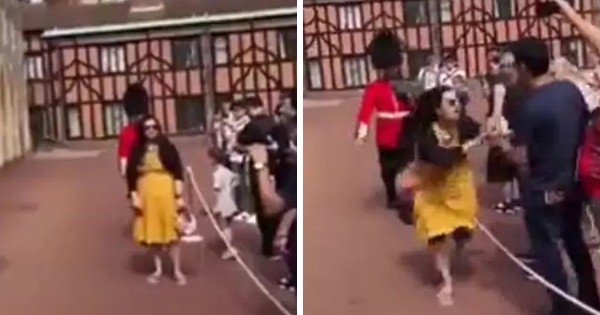 If you thought that the Queen’s Guard are just for show, think again.

This female tourist made the mistake of crossing a rope barrier at Windsor Castle which was intended to keep non-Royals out, so she learned a lesson that day: never mess with a Queen’s Guard.

In this video footage of the incident, the tourist can be seen standing in the path of a marching officer.

She was posing for a photo, but was on the wrong side of a fenced-off area clearly meant to be off-limits to tourists.

Without missing a beat, the soldier marches right into the woman, sending her flying forward with a shriek.

The fully-trained, serving soldiers, who are charged with protecting official royal residences, are a favorite tourist attraction in the UK.

These red-clad military men have more than 350 years of history and have defended monarchs since Charles II took the throne after the English Restoration in 1660. They are picked from one of five infantry regiments and have been protecting royal residences for three centuries.

This was not the first time that a tourist had impeded in a soldier’s job of protecting the royal grounds. Whenever these incidents happen, the soldier will shout: “Make way for the Queen’s Guard.”

The Ministry of Defence said: “The Household Division is proud to guard Her Majesty and honoured that people come from around the world to watch our ceremonial spectacle.” 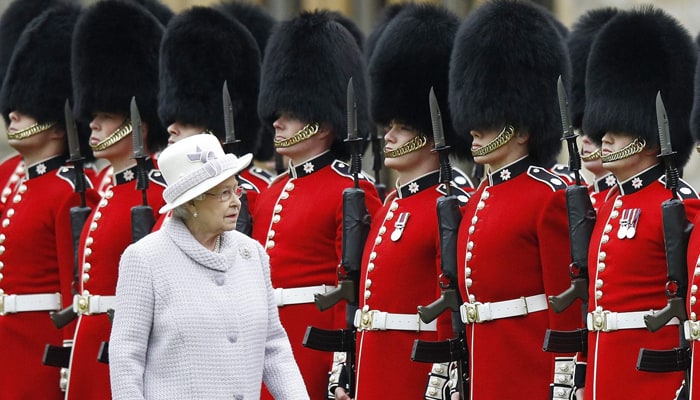 “The ropes are there to protect both the public and our soldiers; please stay behind them.”

The protocol that the guards must follow begins with stamping their feet and shouting.

Raising a rifle is considered a ‘final warning’, after which the guardsmen is allowed to detain the person in question.

It is not known exactly when the incident occurred, but the woman in the video seemed unharmed.