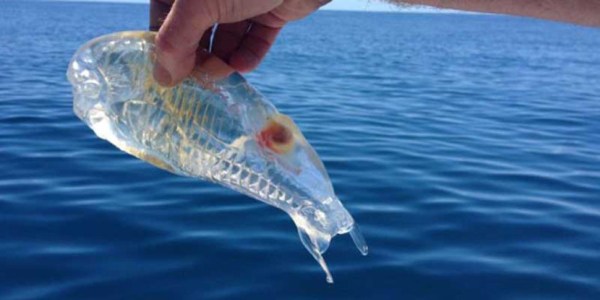 What do you do when you don’t have any teeth, claws or toxins to protect yourself from menacing predators? These transparent fish and other transparent animals camouflage themselves by baring all.

Also known as the Glass Shrimp, this translucent crustacean is a popular pet. Its natural habitat is in the brackish water of wetlands, where it is a skilled scavenger.

This intriguing transparent fish has barrel-shaped tubular eyes that are extremely light-sensitive eyes and are directed upwards to detect the silhouette of prey. The eyes are cased in a transparent domed head, which allows the fish to capture maximum light. The luminous organs of this fish glow because of the presence of symbiotic bioluminescent bacteria. The two spots above the fish’s mouth that look like eyes are actually olfactory organs called nares (similar to human nostrils).

This amazing amphibian has a transparent under-belly allowing you to see a fully visible system of organs. These nocturnal creatures are tiny — a mere 2–8 centimetres — and live in the canopies of Central and South American rain forests. When they sit still, they’re extremely difficult to spot from a distance.

This ghostly Antarctic transparent fish has colourless blood — it’s the only known vertebrate without red blood cells and hemoglobin (the iron-rich protein that binds and transports oxygen through the circulatory system).

These beetles are quite colourful, but posses an entirely transparent upper shell that surrounds it like a bubble, creating an entirely unique appearance.

These tiny barrel-shaped organisms move through the water by pumping water through their gelatinous bodies, munching on phytoplankton as they go. Salps are known for their unique life cycle, during which they exist both as individuals (above) and part of a larger organism (below). Four-inch (10.2 centimeter) sea salps link together to make luminous chains up to fifteen feet (4.6 meters) long!

This alien-like sea creature lives at a depth of 2,750 meters, on the ocean floor. It creeps forward on its many tentacles at about 2 centimeters per minute while sweeping detritus-rich sediment into its mouth.

There are about 60 different species of glass squid that make up the Cranchiidae familiy. Many species are bioluminescent and possess light organs on the undersides of their eyes. They typically move vertically to reduce visibility, as their digestive glands can be seen through their transparent skin.

Jellyfish are found in every ocean and have roamed the earth’s waters for at least 500 million years. There are many different kinds of jellyfish that are transparent or translucent. In addition to imparting a beauty and elegance few ocean creatures can rival, their see-through nature makes them dangerous to swimmers who might not see their stinging tentacles coming (pictured: Antarctic transparent jellyfish).

Raja Binoculata or ‘big skate’ is often found in shallow waters. Its human-like ‘face’ makes it a popular attraction in aquariums all over the world. Their very pale skin reveals internal organs — if you can get close enough that is!

This deep-sea shrimp-like creature may be tiny (most never exceed 1 inch in length) but it makes up for it in extreme ferocity. Phronima females attack salps, eating them from the inside, and then lay their eggs inside the dead bodies. You wouldn’t want to mess with these little critters.

Discovered only a few years ago, this blue-bellied fish is only a few millimeters long. It lives in Rio Negro, the largest tributary of the Amazon River and seems to appear only at night.

These ethereal, otherworldly, translucent sea slugs hover through the cold waters of the Arctic Ocean. If they look familiar it might be because they are the real-world inspiration behind the Pokemon characters Phione and Manaphy.

This endangered lungless salamander is not much of a traveller. It makes its only home in Barton Springs, a group of natural springs in Austin, Texas.

These tadpoles’ see-through skin allow us to see their neatly coiled intestines. Pain au raisin anyone?

The Asian glass catfish is one of the most transparent vertebrates on the planet. Most of their organs are located near the head and with a magnifying glass their heart can be seen beating. When the light strikes the fish just right, it can create an iridescent rainbow color. They live in slow-moving streams throughout Thailand, Malaysia and Indonesia. After death, they turn a morbid milky white colour.

Gaeotis flavolineata is a gastropod whose bright green shell has evolved to become too small for it to retract into fully — making it something in between a land snail and a slug.

The jumping spider family contains more than 5,000 species making it the largest family of spiders in the world. Worryingly, they have some of the best vision among arthropods and move with lightening speed. This one, spotted in Ecuador, is particularly scary in light of its transparent head and piercing eyes.

Comb jellys (Mnemiopsis leidyi) have a lobed body, one or two cells thick, that is oval-shaped and transparent. These combs give off a crazy rainbow-colored glow when the jelly is disturbed.

This ghostly octopus is found in the deep open tropical and subtropical waters around the world. Because they are so rarely captured — physically or on film — very little is known about them. Unlike their opaque cousins, these octopuses have elongated eyes that seem to be pointed perpetually upward, presumably to maximise the dim light from above.