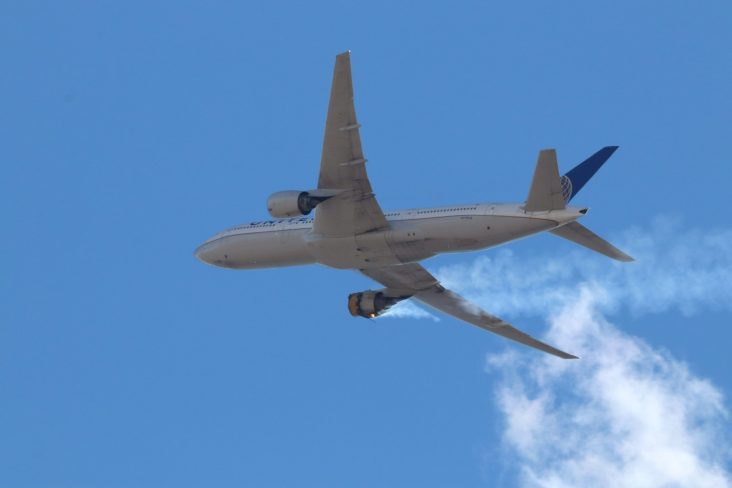 Photo taken by @HS_Colorado! What an incredible job by the pilots!

A United Airlines flight bound for Honolulu was forced to make an emergency landing in Denver, Colorado experienced an engine failure and appeared to have caught fire while passengers were on board.

United Airlines flight 328 had just taken off when it was forced to return to Denver, Colorado, due to a “reported engine issue,” Denver International Airport officials said.

“The aircraft has landed safely, and no injuries have been reported. Big thanks to the pilot and crew for safely landing the aircraft,” tweeted the airport.

United Airlines posted a statement to social media on Saturday evening, saying, “Flight UA328 from Denver to Honolulu experienced an engine failure shortly after departure, returned safely to Denver and was met by emergency crews as a precaution. There are no reported injuries onboard. We are in contact with the FAA, NTSB, and local law enforcement.”

The plane dropped debris in several neighborhoods, including in front of homes and a park. Luckily, no injuries on the ground have been reported, according to the Broomfield Police Department.

The aircraft, a Boeing 777-200, was carrying 231 passengers and 10 crew members. The police department has warned people on the ground to report any found debris and not touch anything they find.

The Federal Aviation Administration also announced that it would investigate the incident in conjunction with the National Transportation Safety Board, which will lead the investigation and provide updates.