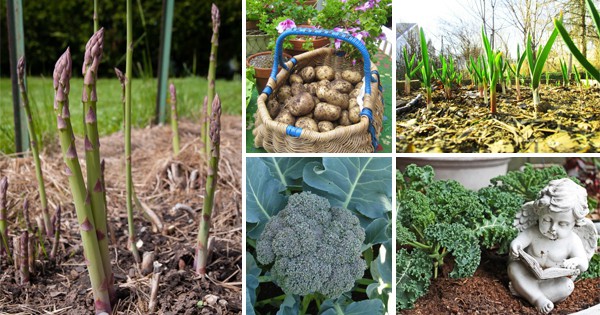 If you’re a fan of growing your own food, you might be dreading the upcoming winter and all the cold it carries — don’t! There are plenty of vegetables you can sow right now, and even later in autumn and still enjoy throughout the holiday season, while the weather outside is frightful.

Onions might not be the first thing you had in mind, but they’re fairly easy to grow indoors and they’re quite a hardy bunch. Sowing onions in autumn is a good way to get them good and ready in summer — they need the cold.

Just like onions, garlic needs to sowed pre-winter so you can get your full-grown bulbs in summer — or luscious green garlic in early spring! Both options are great, although green garlic is noticeably less garlicky. Growing them indoors is easy, too!

Named spring onions because they’re literally autumn-sown onions harvested prematurely in spring, these greens are excellent in soups, to make broth with, as garnish in a million different dishes or just because you like the slight spice of a crunchy bite of spring onions.

Asparagus, although it might not seem like it, is a botanically-distant cousin to the onion and garlic family. That’s probably why it can survive the winter — but despite that, it didn’t inherit its cousin’s easygoing personality.

Only tackle this crop if you’ve got access to a little garden, and then do so with the right approach (mulching, straw, care, etc.) — when done right, a strong asparagus plant can produce delicious spears for way over a decade.

Broad beans (or fava beans) are much easier to get going, especially indoors. You can plant them outside during the winter after nursing them in the fall, and with a little luck and a pair of green thumbs, you can land yourself a delicious spring bounty.

Some peas are just as protected as their pod-bearing bean-brethren, and enjoy the same autumn-sown spring-reaped cycle. Mind you, regular peas take much longer than early spring to mature, so you’ll have to look for specifically hardy cultivars.

And so we begin with the cut-and-grow entries — komatsuna, and perpetual spinach are both hardy enough to survive winter over and over again. Plant them now, or in a month, then enjoy their spring-time harvest until the next time they’re ready to be reaped.

If you wait too long on this nutritious bunch, you may have to baby them indoors before moving them to a colder, frost-prone area. Hardy enough to sustain winter with a little protection (or grow indoors!), land cress fits right in between watercress, spinach and mustard greens as a great leafy addition to your winter salads.

The Brassica family is a hardy and versatile one, and requires little protection to produce spicy cut-and-grow crops all throughout the year. From Japanese mizuna and mibuna, to Chinese and Indian variants, they’re delicious as long as you get ’em while they’re young. Leave the leaves to grow for too long, and you get bitter greens.

Broccoli was originally created by the Romans, through old-school genetic manipulation — selective breeding. A relative to cabbages and mustard greens, it takes a good while to mature into frost-resistance, as much as three months. Sowing any later than that means you’ll have to keep it out of harm’s way in a greenhouse.

Hardy and fast-growing, collard greens can be planted in early autumn and first harvested when winter begins (they take about two months to mature). Like the previous plants, they’re cut-and-grow — and once mature, they’re also frost-resistant.

The dark-green superstar of the leafy veg world, kale is either the most disliked or loved among its green family. But no matter whether you hate it or love it, it’s a healthy crop that can survive a little frost — in fact, the colder it is (as long as it doesn’t get much colder than 20°F) the sweeter the leaves get.

Microgreens are the ultimate plant-based fast-food — literally. It takes about a week from planting to eating, and while no one’s going to argue that you can subsist solely on tiny little mustard and lettuce sprouts, they’re a great and healthy little addition to, well, practically anything. Biggest bonus? They grow at home no matter what time of year it is! Just make sure you’ve got a sunny window.

Potatoes are reasonably harder to get going indoors than they are in a large garden, but if you’re willing to do some DIY work, you could be reaping sacks and sacks of spuds all year round. Potatoes can thrive outdoors in southern winters — although if you’re further up north you’ll have to wait until spring to sow your taters.