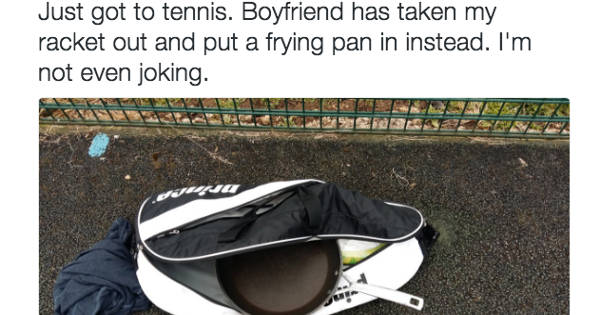 Contents show
#1. This absolute joker of a boyfriend.
#2. This report that predicted more than just the weather.
#3. This eye test result that understands your problems.
#4. This desperate attempt to make learning fun.
#5. This brilliant idea.
#6. This one-in-a-million problem.
#7. This musical castoff.
#8. This Queen meeting.
#9. This bizarre sign.
#10. This poor attempt at dressing up.
#11. This sad reality of 2016.
#12. This beautiful poem.
#13. This replacement for Netflix and chill.
#14. This creative concept.
#15. This gender struggle.
#16. This loophole.
#17. This life coach who doesn’t want you to miss the party.
#18. And this politician who needs to up his dating game.

#1. This absolute joker of a boyfriend.

Just got to tennis. Boyfriend has taken my racket out and put a frying pan in instead. I'm not even joking. pic.twitter.com/HD8YOAqfJ2

#2. This report that predicted more than just the weather.

Weather forecast predictions for my mood as well as the weather pic.twitter.com/Yz7DDv94iv

#3. This eye test result that understands your problems.

Needless to say, I don't think it's good news. pic.twitter.com/LuGppvSycJ

I want a sitcom about these neighbours pic.twitter.com/DL4enweF3c

Imagine the trouble she has trying to introduce herself in France. pic.twitter.com/RTeQ2KGr02

I believe Slash and Axl actually came to blows over this first draft. pic.twitter.com/Jr1MfV8A2l

To anyone attending the Bohemian Rhapsody rehearsal this afternoon, we're up in the treehouse… pic.twitter.com/CXaRTM97v6

No Scottish shortbread for you little man! pic.twitter.com/MKQzPLo3Qj

#10. This poor attempt at dressing up.

#WorldBookDay
Forgot they had to be in costume, so they're going to school as pages 89 & 165 of the Argos catalogue pic.twitter.com/5JHnHlRbte

I'm not saying that David Bowie was holding the fabric of the universe together, but *gestures broadly at everything*

#13. This replacement for Netflix and chill.

Feel sorry for all you idiots still stuck doing "Netflix and chill". pic.twitter.com/ID0L3heSng

Every time I see this poster I think it's an advert for Paul Mcartney's new album pic.twitter.com/UKSLrVh105

Very sad to see that the gender pay gap persists even in the anthropomorphic hoover community. pic.twitter.com/fGeuzjVNXg

#17. This life coach who doesn’t want you to miss the party.

has anyone ever read something so beautiful and poetic pic.twitter.com/lzAjTJV75p

#18. And this politician who needs to up his dating game.