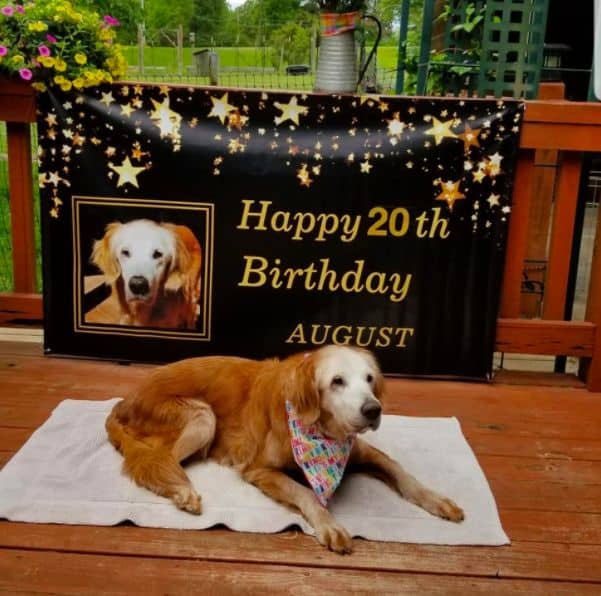 Bring out the party poppers and cheer for the world’s oldest living Golden Retriever!

Augie’s fur parents, Jennifer and Steve Hetterscheidt, adopted her when she was 14 years old.  Prior to this, Augie has had two other homes.

To celebrate her birthday, Augie was treated to a dog-friendly carrot cake and spent time with her siblings Sherman, Bruce, and Belle — all Golden Retrievers!

Golden Hearts explained that most Golden Retrievers only live up to 10 or 12 years. The oldest they have seen reached up to 15 years, but the majority of these dogs die earlier than their expected life span.

Jennifer says Augie is healthy for her age. She can still move around well, although, at times, she struggles to get up. Augie loves walking around the yard every day, too. Although Augie had some problems with her kidneys when she was 14 years old, she stays healthy by eating a diet of mixed wet and dry dog food. She also takes supplements for better joint and kidney health.

Golden Hearts attributes Augie’s long life to great genes and the love and care given to her by her owners.

According to the group, Golden Retrievers like Augie can live beyond expected when fed with quality dog food, groomed regularly, and given regular exercise. Trips to the veterinarian and paying close attention to their needs also add to their long and happy lives.