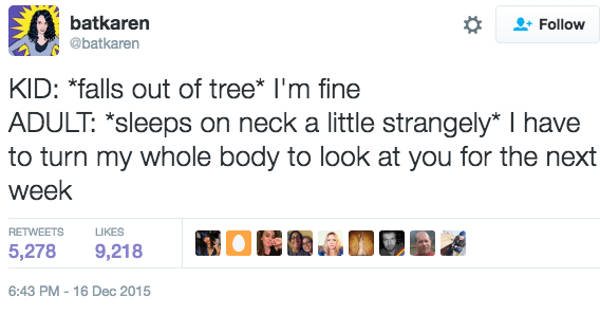 Mentioning your best friend in front of regular friends lets them feel the sting of inadequacy they deserve!

ME:[defending myself] Oh yeah?? Well I got 5 words for you buddy: please be nice to me

— said Drumpf at the restaurant & everybody clapped (@AbrasiveGhost) April 16, 2016

#6. On being really useful.

#7. On that weird inner confidence we all have.

My one weakness? Probably my unshakable belief that, despite a total lack of training, I'll be able to do karate if I'm ever in a fight.

If no one comes from the future to stop you from doing it than how bad of a decision can it really be?

1985: you will literally go blind if you are too close to the tv screen

2016: PUT EVERYTHING YOU DO ON A SCREEN REAL CLOSE TO YOUR FACE

Putting your iPod on shuffle around your friends is like playing Russian roulette with their respect for you.

#13. On the modern sense of community.

Who the fuck is this asshole?

Me- every time someone drives down my street.

I don't know why I'm anxious. I just constantly stare at a device that beams nightmares into my eyes.

#17. On aching bones and weary bodies.

KID: *falls out of tree* I'm fine
ADULT: *sleeps on neck a little strangely* I have to turn my whole body to look at you for the next week