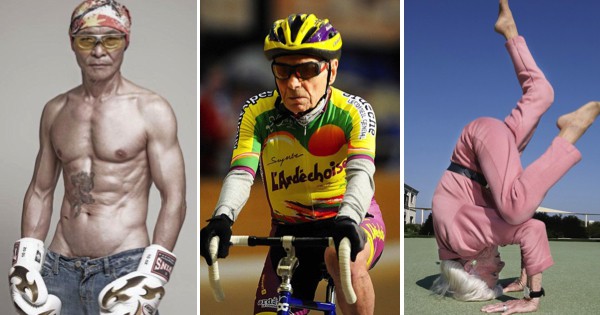 Today (Wed 25th May, 2016) is Senior Health and Fitness Day. So what better way to highlight the importance of exercise and nutrition for the ongoing health of seniors than with these pictures and videos of 17 super fit OAPs who could kick your butt any day of the week.

#2. How about this 61-year-old grandad from China who clearly trained hard for the Dakar Rally off-road car race?

#6. Yoga instructor Bette Calman may be 83, but she can do the peacock pose better than you.

#7. Jim Morris may be in his 80s, but he’s continuously defied age by keeping his body competition-ready for most of his life. Vegetarian since 1985, he went permanently vegan in 2000.

#10. Duan Tzinfu, 73, performs moves that are so complex that even young athletes can’t compete.

#12. Women Aikido group in Novosibirsk, Russia. The youngest member is 55 years old, and the oldest is 75.

#14. Ernestine Shepherd is 78 (75 in this video) and is an American bodybuilder. She started training in her late 50s and now has a better body than most people half her age.

#15. Jack Denness, an 80-year-old British grandfather, is the oldest person to finish an ultra-marathon in the United States.